Comics In Conversation at the Art Gallery of Hamilton:Julie Doucet and Fiona Smyth (Moderated by Alana Traficante) 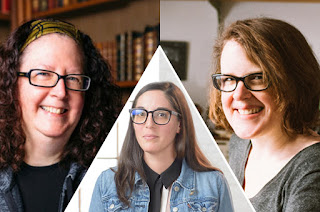 Julie Doucet and Fiona Smyth both occupy a deeply entrenched, highly influential space in the genre of comics, and both are renowned for their artwork, which is unapologetically feminist, righteously self-assured, and aesthetically brave.
In this panel, moderated by THIS IS SERIOUS: Canadian Indie Comics co-curator Alana Traficante, the artists will discuss their careers in comics, and the challenges and opportunities afforded by this genre.

https://www.artgalleryofhamilton.com/program/comics-in-conversation/
Posted by Fiona Smyth at 15:31 No comments: 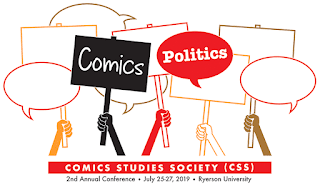 I'm honoured to be talking with Jillian Tamaki and Qiana Whitted Saturday morning.

http://comicssociety.org/conference
COMICS/POLITICS
The 2nd Annual Conference of the Comics Studies Society
July 25-27, 2019
Ryerson University, Toronto, Canada
About Our Annual Conference
The CSS annual conference is an opportunity for comics scholars, students, creators, librarians, curators, and fans to convene for three days of panels, roundtables, workshops, exhibits, and social events that reach out to the local and broader comics communities.

CSS held its inaugural annual conference from August 8-10th 2018 at the University of Illinois Urbana-Champaign, hosted by Carol Tilley. The CSS 2019 conference will take place from July 25th -27th 2019 at Ryerson University in Toronto, co-hosted by Candida Rifkind and Andrew O'Malley.
Posted by Fiona Smyth at 14:56 No comments: 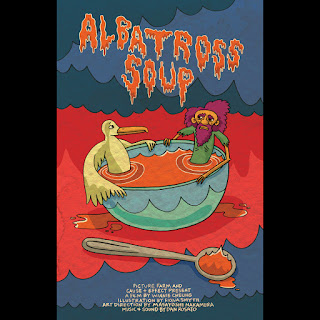 You can now watch the full animated short Albatross Soup on Vimeo. Directed by the fantastic Winnie Cheung and animated by the brilliant Masa Nakamura! I worked on it too!

Fiona Smyth, Alootook Ipellie to be inducted into the Giants of the North Canadian Cartoonist Hall of Fame

April 23, 2019 by Brad Mackay
Fiona Smyth, an artist and teacher known for her groundbreaking comics tackling female sexuality, and Alootook Ipellie (1951–2007), a multi-faceted artist, writer, activist, and cartoonist recognized for his satirical comics about Inuit life in Canada, will be inducted next month into the Giants of the North Hall of Fame for Canadian cartoonists.
For more than three decades, Fiona Smyth’s work has straddled art, comics, and murals. Since her days as a student at the Ontario College of Art (now OCAD University) in the mid-1980s, her comics have been marked by a bold and overt sexuality—rare for a female cartoonist at the time—that often, erroneously, saw her labeled an anti-feminist. Alongside her countless self-published zines, Smyth’s comics have appeared in Vice, Exclaim!, and her pioneering 1990s Vortex series, Nocturnal Emissions.
Smyth’s work has been exhibited in countries around the world, including the United States, Mexico, Berlin, France, Venice, Taiwan, Korea, and Japan, and Torontonians are familiar with her eye-catching mural gracing the exterior of iconic local club Sneaky Dee’s, located at the intersection of College and Bathurst streets.
Smyth’s publications include The Never Weres, a science fiction graphic novel for teens, and a series of progressive “sex talk” books for children, created with the writer Cory Silverberg. In 2018, Koyama Press released Somnambulance, a career retrospective of Smyth’s work to date. Presently, Smyth teaches illustration and cartooning at OCADU.
Alootook Ipellie was born in 1951 in Nuvuqquq, a small hunting camp located near what was then Frobisher Bay, Northwest Territories—now known as Iqaluit, Nunavut—and later settled in Ottawa. He developed an early and abiding interest in comics and eventually became a graphic artist in his own right, creating work that often satirically examined the modern world’s impact on traditional Inuit life.

Ipellie was the editor of Inuit Today magazine and contributed comics to many publications, including Inuit Monthly and Nunatsiaq News, some of which featured his characters Nuna and Vut. Ipellie was also an accomplished writer, designer, photographer, and Inuktitut translator. His books include Arctic Dreams and Nightmares, a collection of stories and striking pen-and-ink drawings.
Ipellie’s work has been displayed in countries including Germany, Australia, and Switzerland. An internationally touring retrospective, Alootook Ipellie: Walking Both Sides of an Invisible Border, launched in Ottawa in 2018, with stops scheduled this fall at the Art Gallery of Hamilton and spring 2020 at Gallery 1C03 at the University of Winnipeg. Ipellie died in Ottawa in 2007.
Artists are elected to the Giants of the North Hall of Fame by the Doug Wrights Awards executive committee, which solicits input and suggestions from across the Canadian cartooning community.
This year’s Giants of the North nominees will be inducted on May 11 at the 15th annual Doug Wright Awards, a featured event of the 2019 Toronto Comic Arts Festival (TCAF), which takes place May 11–12 in and around the Toronto Reference Library.
Media inquiries: dougwrightawards@gmail.com   dougwrightawards.com 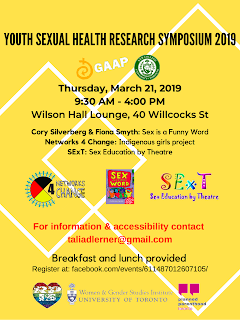 Youth Sexual Health Research Symposium 2019
40 Willcocks St, Toronto, ON M5S 1C6, Canada
https://www.facebook.com/events/611487012607105/
The goal of the symposium is to bring together community youth (ages 16-35 who are part of a youth group/organization, not attending University, or would like to get connected with people of similar passions) and university students to share their research and artistic pieces on youth sexual health. In the current political climate, this year's symposium will provide a crucial forum for youth asserting their right for progressive sexual health education. During the symposium, students, youth, academics, policy makers, and community members working in or interested in the field of youth sexual health will be given the opportunity to network and engage in each other’s work. We encourage students from all disciplines and community youth to present research "in progress," test out ideas for a thesis or dissertation proposal, or present original research or artistic pieces.
Posted by Fiona Smyth at 03:41 1 comment: